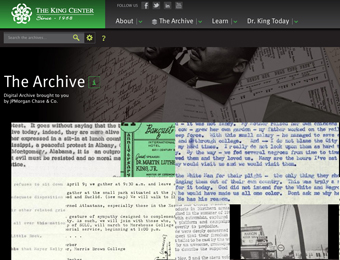 Dr. King had a lot to say about government spending: he wanted more of it to go to the poor – not in handouts, but in jobs. According to the The King Center’s Digital Archives, “His economic thought negotiated the individualism of capitalism and the collectivism of communism, which promoted a socially conscious democracy. King’s economic thought fed on his positions on economic imperialism, government spending, employment practices and housing options.”

This column, published on New Year’s Day 1966 in an unidentified publication, calls for pragmatic measures to end poverty – and warns that extreme poverty and neglect can lead to violence.

Dr. King warns against welfare and advocates instead for more employment of African-Americans and every American – including an increase in and broadening of the minimum wage. And he points out something interesting in light of today’s unemployment rate: “Despite the recent slight decline in our national employment, the jobless rate among Negroes remains almost double that of whites…”

CNN Money reported back in August of 2011 that the unemployment rate for black Americans was 16.7 percent, while that for white Americans was 8 percent. So, 45 years later, this aspect of America apparently hasn’t much changed.

And we wonder how this passage would go over in today’s world: “We must urge the Federal Government to initiate daring massive works programs to feed the needs for decent housing, schools, hospitals, mass transit, urban renewal, parks and recreation centers. This should be done not merely for ‘make-work,’ but for the rebuilding of America.”

The best thing about the economics theme is that it contains a speech that King made to The Hungry Club of Atlanta at the end of 1965, called A Great Challenge Derived from a Serious Dilemma. The dilemma, as he defines it on page 2, is that “he who starts behind in a race will forever remain behind unless he runs faster than the man in front.” I believe this will be seen as one of the great speeches of Dr. King, but which was previously “lost” because we had no audio or video of it. It also includes some breathtakingly beautiful metaphor, like this: “If one sets out merely to be a good Negro doctor, or a good Negro lawyer or a good Negro school teacher, or Negro barber or beautician, or Negro skilled laborer, he has already flunked his matriculation examination for entrance into the school of integration.” Or like this: “Somewhere we must come to see that human progress never rode in on the wheels of inevitability.” Or this: …”it is cruel to tell a bootless man to lift up himself by his own bootstraps.”

More archives can be found at TheKingCenter.org.