How Chicago families can survive the challenges of middle school 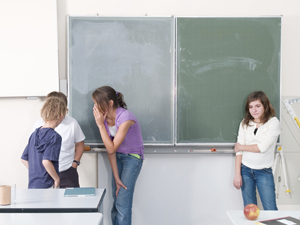 Middle school can be tough on both parents and kids. It’s a time of drastic change. Not only are kids moving on to new schools with older students, but they also are going through physical and emotional development that, at times, can seem overwhelming.

“It’s this weird time where they are forced to evolve into the adult world, start taking responsibility for academics and classes changing, but also bodies and friendships are changing at the same time,”says Haley Kilpatrick, author of The Drama Years and the founder of Girl Talk.

While your child will be facing some of the same issues as past generations, the way they navigate the halls will be much different.

“A lot has changed for middle school in general,”says Kristen Blair, co-author of From Santa to Sexting.”It has always been a time of drama, drama, drama. But what we heard during our interviews with parents and educators is that middle-schoolers today are bombarded by outside pressures. In fact, we heard that word `bombarded’ repeatedly. And that stems primarily from technology and media and the pervasive role that has in kids’ lives.”

To help, Blair encourages parents to wait until high school to give their child a cellphone.

“I know that the trend is moving ever younger in terms of cellphone ownership,” Blair says, “but middle-schoolers generally do not possess the maturity and self-control to use some of these tools safely and responsibly.”

Blair also advocates waiting until high school to get involved with social media.

“(Parents and kids) need to view the Internet and social networking sites as public spaces where the footprint never fades and understand that anything kids post can follow them for years to come,” Blair says.

Technology in middle schools also has led to an increase in cyber bullying.

According to Catherine DePino, author of Who Says Bullies Rule?, this is the most prevalent kind of bullying today.

DePino encourages parents to keep dated records of any bullying incident. Once it is reported to the school, ask for a timeline to know how the situation will be handled and when.

If your child encounters a bully at school, DePino says it’s important for them to use short phrases and talk firmly. The point is to appear tough without appearing aggressive.

Chicago-area child and adolescent therapist Kristen Jacobsen says communication between parents and their child is key when it comes to bullying.

“For parents, (it’s important) to have an open dialogue with their kids about it, maybe even before it happens, just so they have an awareness of it,” Jacobsen says. “If they are the bully, it’s important for them to understand how it makes the victim feel and what they are doing as the perpetrator.”

Through all of this change, your child’s friendships will become one of the most important aspects of their life. Middle-schoolers are more influenced by their peers than at any earlier age.

“What is best for kids in terms of friendship security and fulfillment are what experts call `friendship circles,'” Blair says. “They’re based not on popularity, but rather on shared interests and common experiences, where kids can be themselves and they’re not constantly jockeying for position or worried about being knocked down the hierarchy.”

No matter your child’s friend group, they might experience friendship drama. Kilpatrick says it’s important to remember that these problems are very real to them, even if they seem silly as a parent.

“They have tunnel vision and cannot see the light at the end of the road,” Kilpatrick says. “…If more girls could learn to really love each other through these years and face what it is they’re dealing with head on, there would be a lot less drama.”

If self-esteem and body image become an issue for your child, Jacobsen says combating that begins at home from an early age.

“(Parents should) make their positive reinforcement and encouragement specific and instill in the child that they are worth something,” Jacobsen says. “If they have that sense of self, even if they do encounter some negative peer interaction, they will be able to bounce back and have a little more resiliency than some of the other kids who maybe didn’t have that growing up.”

Through it all, know that the best way to help your child is by being there for them. And remember, these years won’t last forever.

“Be the parent, not the buddy,” Blair says. “Role reversal never works. Your child needs you to be the parent. And take heart. Middle-schoolers may act like they can’t stand you and they don’t want to be with you, but they do. Their hearts need you.”