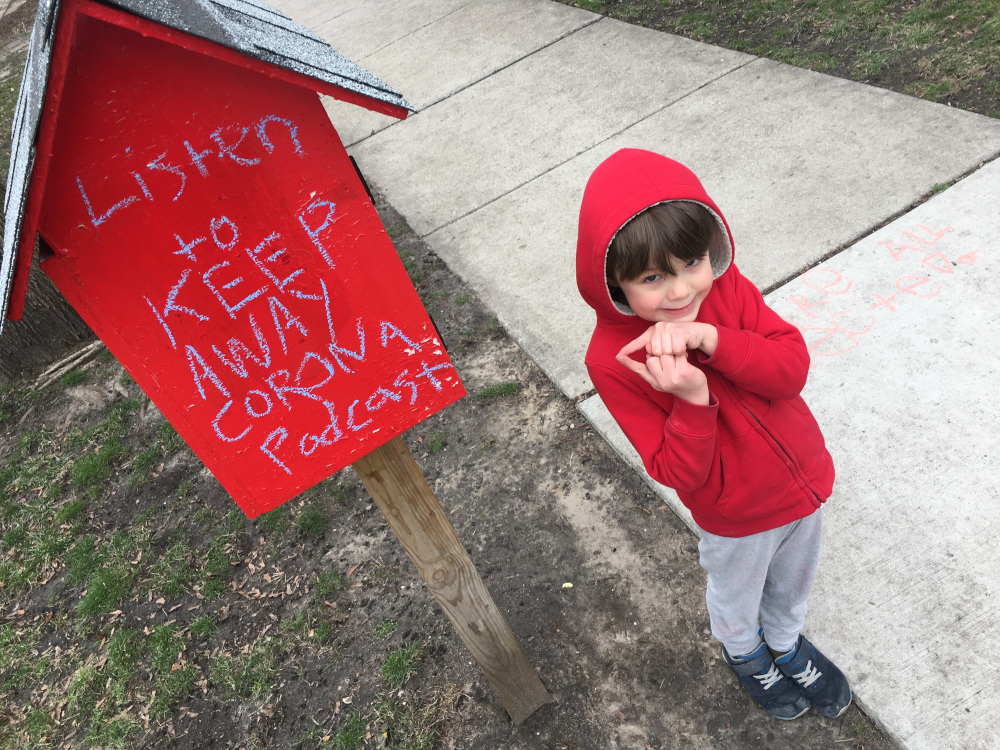 If you need a smile today, then you need a little Albie Gill in your life.

The adorable 5-year-old-turned-journalist has created the “Keep Away Corona” podcast (with editing and technical assist from his dad, Andrew). He even created the catchy earworm of a theme song himself.

Right now, “Keep Away Corona” has listeners in 10 countries.

“I feel like so many different things doing this podcast,” Albie says. “I feel happy.”

So far, Albie has interviewed his teacher, best friends, grandparents and has a growing list of actors thanks to Uncle Daniel (no A-listers yet!) eager to be interviewed. He’s says the list is 200 people long (dad says it’s not that many yet.)

The idea started when Andrew started working from home, recording Sound Opinions for his job at WBEZ. Albie was drawn to the equipment. He recorded a pretend news report and texted it to family, who then started asking him to interview them and make the podcast public.

“I thought it was going to be fun,” Albie says.

His favorite part: Getting to push the buttons and plug in the equipment.

As executive producer, a new interview happens when Albie feels like it; no pressure from dad or mom Meghan Murphy-Gill, a hospital chaplain.

While Albie says he wants to be a journalist when he grows up, dad is quick to add with chuckle that the family is encouraging him to look at other careers with a more stable future and encouraging STEM activities.

Albie, a kindergartner who says he’s shy (dad says he’s not), says he’s sad he didn’t get to finish his math book at school. “I miss school. I want to go back to school,” he says.

To fill the days, he goes on walks with his mom and dad, taking sidewalk chalk with him to draw his friends messages outside their homes. He’s also looking forward to playing baseball with his dad.

Podcasts have been part of Albie’s life since he was a baby. Andrew says a lot of people probably don’t know there are so many great ones for kids and are a great alternative to screentime.

Already Albie is thinking about what he’s going to do after the coronavirus. He says he’s going to keep making the podcast, focusing on other virus and helping people stay healthy.

“Because I care about other people,” he says.

It’s easiest to listen to Albie’s podcast on Spotify.

Chicago Parent Staff -
Have a spooktacular time with your family thanks to these local events.
Read more
You