How Gen Z learns: they aim to change the school experience for the better 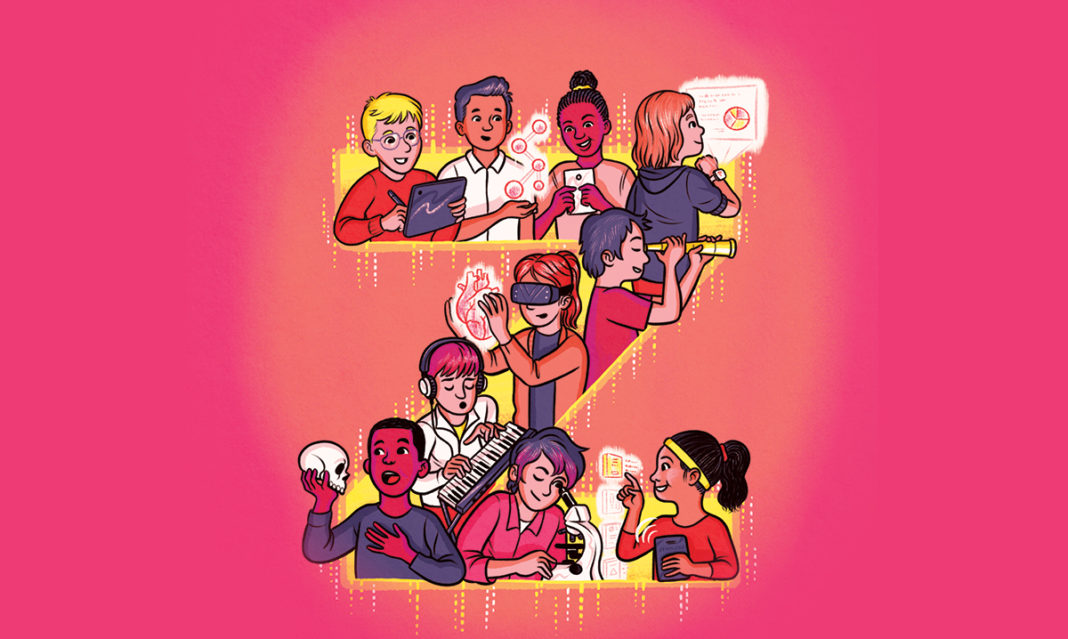 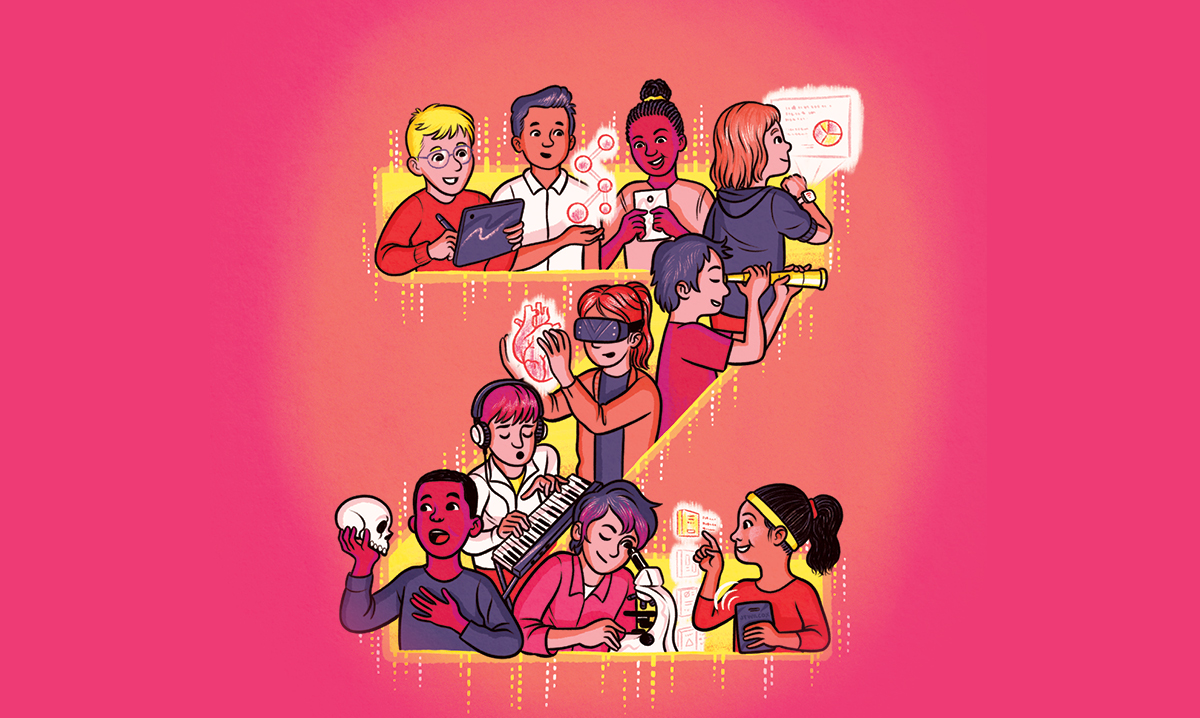 The question — known so well by our household virtual assistants — says as much about kids’ classic disdain for math worksheets as it does about the drastically different ways our children are accessing information into the 2020s.

Instant educational gratification has become the norm. Beyond a quick answer to who masterminded after-school assignments (Alexa says it’s probably Roberto Nevilis, by the way), our kids have multiplication facts, key historical dates and more at their fingertips. Trying to draw a horse? There’s a YouTube video for that. Learn that dance move everyone’s doing? Just open TikTok. And current events? Forget the news; my middle schooler learned of the recent conflict in Iran after his Instagram feed was full of memes referencing a potential WWIII.

The 21st-century learner isn’t bound by library hours, dial-up connections or even the content selected by teachers or parents. And that’s just scratching the surface. The answer to how Generation Z learns is more than “in front of a screen.” It’s in groups, with projects, by doing, through relation-hips—and this knowledge is key to propelling our kids forward, even if it means a mindset shift for Millennial and Gen X parents.

“There’s a misconception that different is not better, or that it might be worse,” says Gary Abud, an educational consultant with SAGA Educators. That isn’t the case, he says.

Instead, the latest ways to reach Gen Z—those born between 1995 to 2015—aim to change the school experience for the better.

The one-room schoolhouse features prominently in any imagining of America’s educational roots.

“Personalized learning has grown tremendously. The students are going at their own pace, individually, even though they’re in the same classroom as other students,” Abud says. “If a student is excel-ling, they don’t have to wait for the next day’s lesson to be able to learn more, and a student who needs more time isn’t left behind.”

While one student practices division basics, a classmate might be working out more advanced equations. Like the multi-age classrooms of the past, teachers are increasingly individualizing curriculum to match a student’s progress. Roycemore School in Evanston has always prided itself on personalized learning, but Elizabeth Shutters, director of curriculum and innovation, says she’s seeing the trend becoming more prevalent at other schools.

It’s a trend she likes.

Darren Pierre, clinical assistant professor of Higher Education at Loyola University Chicago, says one of key differences is this generation not only wants more individualized learning but also cares less about individual recognition vs. the Millennial stereotype that everyone deserves a trophy.

As he teaches the students who will become tomorrow’s teachers, Pierre’s been fascinated with the findings in the book, Generation Z Goes to College, by Corey Seemiller and Meghan Grace.

One takeaway is the challenge for teachers to find a way to not only give students that individualized instruction, but to engage them through teamwork using technology and social media platforms in new ways.

“They are going to be engaged learners and driven in ways that we may have never seen before. While they appreciate technology, there is still going to be a value of face to face connection,” he says.

Teachers with classrooms full of Gen Zers will find themselves challenged answering questions of how what they are teaching connects to what’s happening right now on political and social issues, Pierre says. They have to be prepared for “how students are bringing energy of the world into the classroom.”

If there’s one thing most people understand about Gen Z, it’s that they’re always communicating—both “IRL” and online. So, it’s no surprise to see collaboration take center stage in the classroom.

Even more than that, he says, educators are seeing the results of letting kids build learning and understanding through talking with one another. By working with a partner or in a group to solve a problem, students learn from each other, brainstorm solutions and gain important social and cooperative skills.“

Learning is very social, and that is probably more true today than ever before,” Abud says. “So many things are social in our culture. When students are collaborating, I think that’s a good match for how their brains are going to naturally learn things. When kids can talk through their ideas with someone else, it helps their brain to solidify that learning and understanding even better. It’s crucial.”

Student engagement is also increased through hands-on educational activities, which have been proven to help kids retain what they learn. Gen Z students know this better than anyone, as project-based learning has exploded over the past decade thanks to the growing body of research behind it.

It’s another concept that isn’t necessarily new. Project-based learning was supported by influential philosopher John Dewey in the early 19th century; he called it “learning by doing.”

“Project-based learning has taken on a big contribution to education over the last 10 to 15 years,” Abud notes. “Rather than just learning content by itself, students are doing real-world projects that are related to their content as a way to learn things but also a way to develop skills that go beyond the content area that they’re studying.”

Shutters sees that every day. While she describes classes as still fairly traditional at Roycemore, students are given opportunities to connect what they are learning to real life through personal passion projects in middle school or January short terms in high school.

“I think that sometimes they can be misunderstood. I think sometimes we adults might make assumptions that because they are on their phones all the time or can get that information super quickly, that they won’t want to sit down and learn,” Shutters says. “I have found, especially with our (personal passion project) program, that if you can find what a kid is passionate about, then they can really buckle down and get into it and solve problems and be creative in ways that a lot of people might assume they can’t.”

While many teaching methods catering to Gen Z improve the student experience, parents should know that kids today don’t have it “easy.” Far from it.

“This generation has seen more school shootings and more conversations around gay rights and immigration rights than any other generation, they’re the most connected to political issues and they are the first generation born under an African-American president,” Pierre says. “Some of those things are really great things to be exposed to, some of them are very jarring. But even the really jarring things help us understand this is going to be a much more socially conscious generation than perhaps Millennials and Gen X.”

He hopes Gen Z will use the negative experiences for positive change as they get older.

Of course, then there’s the pressure to do well as they manage it all.

“In some ways, the academic pressure that’s out there is even more today than it has ever been before,” Abud says, pointing to staggering rates of student stress and anxiety.

And some of today’s strategies can backfire. Individualized learning, for instance, can come with the unspoken expectation that all students should excel even faster.

“If you’re on grade level, now you’re behind. That perception is out there, whether people want to admit it or not,” Abud says. “That’s part of the crushing academic pressure that is going on.”

With this pressure, Gen Z learners can find themselves “shortcutting”—or gaming the system to gather enough points for a good grade, regardless of what they’ve really learned—or even withdrawing completely.

“Instead of making an at-tempt and doing poorly, they’re just not doing it. A student can then get in trouble for not doing their homework at all, or not studying and doing poorly on a test, and they can say, ‘Well, I didn’t even try.’ They can sort of protect their image,” he says. “That’s a very maladaptive coping strategy that we see commonly in junior and high school.”

Parents should watch for warning signs like habitually missing homework assignments or disengaging from school.

“They’re scared of the way they are going to be perceived,” he says. “It’s no longer just a ‘you did poorly,’ it’s ‘you’re not good enough and you’ll never amount to anything.’ I do see that that’s a direct result of the academic pressure being put on students today.”

If your child is distracted with her cellphone or retreating to a video game, consider that it may be a reaction to stress rather than a Gen Z weakness.

“The psychology on this is very, very clear: We procrastinate or let ourselves get distracted because it’s a mechanism to deal with stress,” Abud says. “When parents see dis-traction or procrastination, it’s a red flag that stress is going on. They need to allow their student to vocalize and name the stress and find a way to deal with that.”

Ultimately, reaching Gen Z is an ongoing learning process that the best teachers and advocates are still working out—just in time to decode Gen Alpha.

Try this at home

Understanding how today’s kids learn best isn’t only useful in the classroom. Consider these tips for supporting your Gen Z learner at home.

• Give your child concrete examples of what you expect from him or her, educational consultant Gary Abud suggests. This is helpful with house-hold chores and at the homework table. “Find a picture of what the finished product should look like,” he says. “That could be a way to get parents and students working together.”

• Offer your child plenty of feedback—and don’t be vague about it. “Gen Z students want specific and frequent feedback,” Abud says. “The frequency of the feedback they’re getting is re-ally important. They don’t want to go very long without knowing, ‘Was this right or wrong?’”

• Keep the big picture in mind. Fretting over a single low test score or underwhelming report card can send a harmful message. “Be aware of the language parents use to talk about academic performance. That can trigger unintentional pressure,” he says. In other words, “Don’t make such ado about grades,” but “keep them in perspective of the bigger picture.”

Most parents don’t know that any school can call itself Montessori. We talked with one of just two AMI Recognized Montessori schools in Chicago to learn why this accreditation matters.
Read more
Outdoors