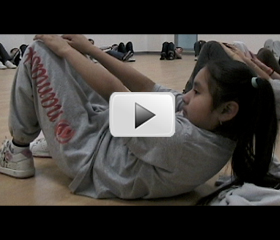 This is the first in our “Living Healthy” series, in which we’ll be profiling organizations on the front lines of the fight against childhood obesity. Check back on Mondays in April for more stories.

A Web-only series from Chicago Parent

January issue, we looked at the alarming rise in childhood obesity. On Mondays in April, we’re shining a spotlight on three Chicago organizations doing something about it.

Check back on April 12 for the next story on a north suburban non-profitteaching healthy eating, one rice cooker at a time.

It’s 8:15 on a chilly, damp morning in late winter, and kids’ voices are bouncing off the gym walls. Actually, so are some of the kids.

But suddenly, the room quiets and music comes on over the loudspeaker. The kids take one deep breath, then another, and reach their arms over their heads as “Here Comes the Sun,” by The Beatles, fills the room.

This is Morning Movement, a daily exercise and stretching session at Namaste Charter School on Chicago’s Southwest Side.

Namaste may very well be the healthiest public school in Chicago. Kids have an hour of gym every day, the only grains are whole grains, and turkey burgers are the most popular lunch.

“It’s not what people expect to see in a public school,” principal Allison Slade says.

Maybe it should be. Between 15 and 20 percent of the nation’s school-aged kids are now characterized as obese, and Chicago’s preschoolers are overweight at twice the national rate. Race and poverty exacerbate the gap: A2004 study found that around half of children in majority black and Hispanic neighborhoods in Chicago’s South and West Sides were overweight, compared to just 10 percent in Norwood Park, which is 88 percent white.

And Namaste, at the corner of 37th Place and Paulina on the city’s Southwest Side, is at the center of the storm. It’s open to all CPS students, but draws heavily from the surrounding McKinley Park and Back of the Yards neighborhoods. About 75 percent of its 360 students are Hispanic, and almost 90 percent qualify for free or reduced-price lunches, a broadly used measure of poverty.

Which means that for a school on a health mission, Namaste has a tough row to hoe; more than 40 percent of Hispanic children in the U.S. are overweight or obese, higher than any other ethnic group. And people of all ethnicities living in poverty are far more likely to struggle with obesity, a combination of little access to fresh produce in inner cities, less leisure time for physical activity among the working poor, and the simple fact that eating healthy is expensive.

And so Namaste uses a curriculum that tackles all areas of healthy living. It starts with the food: There’s a salad bar, and a fruit and a whole grain at every meal. Even the pizzas are made with low-fat cheese, whole-wheat crust and organic tomato sauce.

They also move — a lot. Students have an hour of gym every day, yoga once a week and extracurricular activities include walking clubs and family fitness nights. 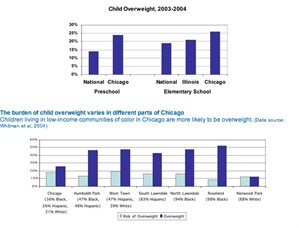 Namaste’s school day goes until 4 p.m., and kids are in school year-round, with three one-month breaks.But when the kids do go home, Namaste makes sure its messages go with them.

“It’s really important that kids aren’t only eating healthy food, but also learning healthy messages so they can make those decisions outside of school,” Slade says. “They’re here a lot less time than they’re at home.”

Involving parents is at the heart of that effort. Family fitness nights are a monthly occurrence and on Fridays, parents are invited in for a catered breakfast. “You can’t change a 5-year-old’s life without helping their parents change as well,” Slade says.

And the name? Namaste is a Sanskrit word that, roughly translated, means “my inner light salutes your inner light.”

“We really wanted to find a name that meant something to us,” Slade says. “It’s just a reminder that we value the unique things that all members bring to our community.”

How many second-graders do you know who do yoga, clamor for turkey burgers, and speak Sanskrit?

“It definitely takes a little getting used to, but we don’t just serve them the food. We do that through nutrition education,” says. “It’s really funny to hear the kids say, “It’s turkey burger day!”